As with barley, peat harvesting was a key component in a distillery’s annual activity until the end of the 1950s. From the end of spring throughout the summer, when the weather is too warm to distill, workers harvested peat from the bogs. This process has been largely abandoned, but is still carried out in the Orkneys and on the Isle of Islay.

THE CHARACTERISTICS OF PEAT

Peat is the result of decomposed plants, heather, grass and moss, which after thousands of years gradually turn into a fuel made of organic waste. Peat is a natural resource and regenerates at a rate of 1 millimetre per year. In northern and western Scotland, vast stretches of peat have accumulated over the years, running several metres deep. On the isle of Islay, some peat bogs are over 10,000 years old. Because of its very high humidity levels (ranging from 25% to 60%), peat releases very little heat and thick, oily smoke when burnt, which allows the green malt to be partially dried, and in particular, infuses the malt with distinctive smoky qualities. 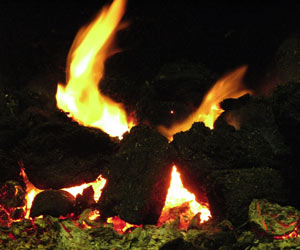 Peat is used in the final malting stage: drying. This would have traditionally been carried out inside an oven known as a kiln, equipped with a metallic perforated plank over which the green malt was spread. Although they now occupy a purely ornamental role, these ovens topped with pagoda chimneys were once distinctive markers of a distillery and were also fuelled with coke and coal. Thanks to mechanical malting, new fuels (natural gas, fuel oil) have been introduced, allowing for drying temperatures to be better controlled, and the malt enzymes to be preserved.

Peat is mostly used for its impact on a whisky’s aromatic palette. During the first ten hours of drying, the peat burns and infuses the moist green malt with its smoke. Temperatures must not exceed 50°C to prevent destroying the malt’s enzymes. Once the grain’s humidity level is brought back down from 45% to 25%, the peat is replaced with another fuel to finish off the barley drying process. At this stage, the malt’s humidity level varies between 4% and 6%, and it is ready to be stored in silos. The value used to determine the quantity of peat contained within the malt is phenol PPM (Parts per Million). In Scotland, in the Speyside region, the average rate of phenols varies between 2 and 3 PPM. On the isle ofIslay, the rate can rise to 80 PPM.

Burning peat generates phenols, in particular cresols and xylenols. The intensity of aromas transmitted by the peat smoke depends on the quantity of peat used to dry the malt and the burning temperature. The most distinctive aromas are liquorice, chimney smoke, ash as well as cloves, camphor and eucalyptus.

In their most extreme forms, peated whiskies can develop aromas of smoked fish and even burnt rubber. Today, the peated malted barley used by the isle of Islay’s seven distilleries mainly comes from the Port Ellen malt house. Around 2,000 tons of peat are used every year to dry the green malt used in making their single malts.