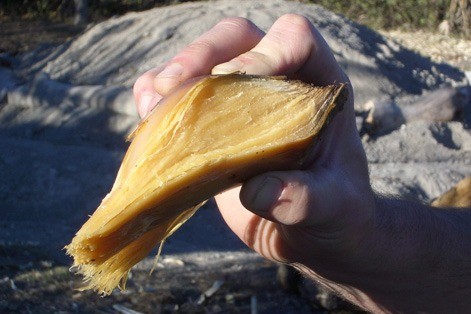 The mezcal market still largely depends on small-scale distillation. Produced on farms, some of which are situated over 2,000 metres above sea level (San Luis del Rio), mezcal production fits naturally into the agricultural cycle, rarely exceeding 400 litres per month.

echnically speaking, all tequila is mezcal, however, the reverse is not true. Originally, all alcohol produced from agave juice was called mezcal. It was only in the 19th century that a distinction was made between the two spirits when, with the industrial revolution, it became possible to cook agave hearts (les piñas) in steam ovens, giving rise to tequila. This was an advanced technique that was rapidly adopted by the majority of producers in the state of Jalisco, who left traditional cooking methods (ovens dug in the ground) to the Oaxaca mezcal producers.

The mezcal market still largely depends on small-scale distillation. Produced on farms, some of which are situated over 2,000 metres above sea level (San Luis del Rio), mezcal production fits naturally into the agricultural cycle, rarely exceeding 400 litres per month. There are an estimated 500 or so mezcal producers who still use traditional methods. Since 2005 each distillery – whatever its size – has had a name and identification number on their labels in order to be able to identify the origin of the product.

THE HEART OF THE AGAVE

Mezcal production is permitted in seven states of Mexico: Oaxaca, Guerrero, Guanajuato, San Luis Potosi, Zacatecas, Durango and Tamaulipas. The natural geological constraints (mountains, poor soil) restrict the agave fruit which cannot be as intensively cultivated as in Jalisco. Producers often use terrace cultivation and the yield for the rarer varieties does not exceed 400 agaves per hectare. Only one variety of agave, the Tequilana Weber Azul, can legally be used in the production of tequila; mezcal, however, can be produced from various species grown in the above-mentioned seven states. There is one dominant variety, however, called ‘espadin’. In Oaxaca, espadin accounts for almost 90% of the plants used, which exposes local growers to the same risks as those in Jalisco: using one sole variety of plant leads to weakened genes from continuous cloning, which in turn leave it more susceptible to disease and insect infestation (caterpillars). Agave growers run the risk of losing several years of work in a few months. To avoid this, several producers prefer to diversify and use other varieties

Mexican eau de vie made from the fermented and distilled juice of the agave fruit, grown in seven legally-authorised states. There are several varieties of agave used in mezcal production: espadin, tobalà, papalote, tripón, tepeztate and largo.

Once the agave has been pulled up from the soil, the fruit is stripped of its leaves to uncover its heart: the ‘piña’. A 70kg piña produces about 10 litres of alcohol. Chopped into two or four, the piñas are then placed in ovens (or ‘palenques’) dug directly into the ground. These ovens are cone shaped, more than 3 metres wide and about 2.5 metres deep; they are paved with stones that are heated for 24 hours before use. The piñas are then covered with moist fibrous remains from previously crushed fruit, buried under a heap of palm and agave leaves and left to cook for two to three days. Once cooked, they are uncovered and left to rest in the open air for a week. A first, natural, fermentation begins at this point. Then the piñas are crushed and mashed by a stone mill, turned by a donkey or horse. The pulp, juice and fibres are mixed with water (about 10%) in order to produce a sugary liquid.

The resulting fibrous liquid is poured into a wooden vat. A second natural fermentation occurs which can take from one to four weeks. The mezcal is then distilled twice or, in exceptional cases, three times. The distillation is usually in copper (introduced by the Spanish) or ceramic (introduced by the Chinese) stills. The must is poured into the still with a portion of the fibrous agave residue. When the first distillation has finished the still is emptied before the second distillation.

Traditionally, mezcal is aged in ceramic jars. However, stainless steel vats are increasingly replacing these. The introduction of casks is relatively recent (1950) and are usually old bourbon casks. Sherry casks are used for the special vintages.

There are two types of mezcal: 100% agave and mixto. Both categories must be bottled in Mexico in order to qualify as mezcal.

100% agave : mainly from artisanal houses and is produced in very low quantities, 100% agave mezcal is made from just one variety of agave (‘single agave’) or from a mixture of several agave varieties (‘blend of agave’). These 100% mezcals cannot contain additives.

Mixtos : mezcal made with at least 80% agave and 20% other sugars, often sugar cane extracts.

JJoven: more commonly known as ‘blanco’, this mezcal is clear and comes directly from the still.

Reposado: mezcal that has been aged for two to eleven months in oak casks of varying sizes.

Añejo: aged for at least 12 months in oak casks (maximum 200 litres in volume), it can sometimes be several years until this mezcal is bottled.

Other mezcal categories Miñero: this historical variety was created for the gold and silver mine workers in colonial times. Miñero, distilled in clay stills, was the most expensive mezcal at that time and considered one of the best.

Pechuga: macerated in a vat with fruits (apples and pears), this mezcal then undergoes a third distillation. Interesting fact: during the third distillation, a chicken breast is suspended directly above the neck of the vat to extract some of the fruity notes.

Crema di Mezcal: recently authorised, Crema di Mezcal is not necessarily made from milk or cream as its name may suggest. Its distinctive features is in Its composition; made up of fruit, dried fruit, spices and agave syrup which make it more like a liqueur.


Mezcal is to Mexico what Islay malts are to Scotland: the expression of a terroir with specific methods of production, as well as a naturally smoky character. Both have this naturally smoky quality which render them similar in taste. A taste which, in the case of mezcal, is becoming increasingly popular thanks to the inspiration and creative talent of numerous mixologists, through their cocktails: smoked negroni, smoked margerita, mezcal tonic...

Due to the different varieties of agave and a largely traditional production method, mezcal offers an array of tremendous aromas and flavours. As well as each mezcal’s unique character, the ageing in oak casks widens and enriches the aromatic palate of this eau de vie. Both ‘blanco’ or ‘añejo’, mezcal can be enjoyed neat, at room temperature for aged bottles or lightly chilled for ‘blanco’ varieties. The CRT (Tequila Regulatory Council) has developed a ‘tulip’ glass which is perfect for mezcal tasting, but INAO glasses are also suitable.