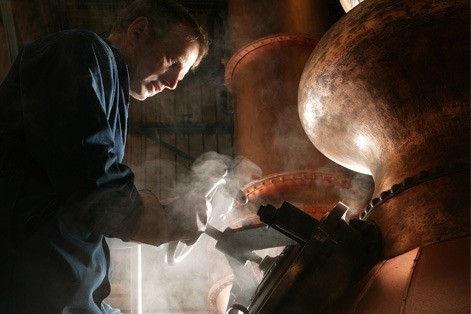 For a long time relegated to second place after vodka, gin began to regain its popularity at the end of the 1980s. Dedicated entirely to the world of cocktails and mixology, there was rivalry at both a creative and technical level. Distilleries introduced new aromatic plants and spices. They were thus able to create unusual flavours, elevating this spirit to new heights, and satisfying the demands of a more sophisticated, educated clientele.

A COMMON SPIRIT THAT BECAME FASHIONABLE

At the height of its glory in the 50s and 60s, gin was the base of numerous cocktails, including the famous Dry Martini. However, the arrival of vodka over this same period had a dramatic impact. Gradually relegated to second place, gin eventually fell by the wayside. During the 70s it suffered from a dated image, and could not compete with a modernized public who had developed a taste for vodka. It was not until the end of the 80s and the introduction of a new brand of gin, Bombay Sapphire, that the spirit’s image recovered, and once again began to arouse the curiosity of barmen and mixologists. Gin became a new source of inspiration and innovation. Distilleries all over the world competed to come up with ingenious new recipes. Original cocktails showcased the aromatic palette of the raw materials (spices, aromatic plants and herbs) while at the same time demonstrating the distilleries’ talent and technical mastery.

THE ESSENCE OF GIN

At the heart of the production of gin is a blue-green berry that grows on a shrub called genus juniperus (juniper). This is then supplemented with other flavourings, such as coriander seeds, that are used by a substantial majority of producers. However, there are no rules regarding the choice and quantities of the herbs, spices and other flavourings that may be added to the eau de vie. While a gin’s final character is of course linked to its various ingredients, its quality and complexity are not solely dependent on the number of spices and aromatic plants used in the recipe (generally somewhere between 6 and 10). In addition to these proportions, the distiller’s expertise consists of knowing the best way to extract the essential oils from the selected plants, flavourings and spices. To each their technique! Some producers think nothing of using all three extraction techniques (infusion, maceration and distillation) in the preparation of their gin.

During the 60s, John Dore & Co Ltd invented a still known as the Carter-Head. Its function was to transform grain alcohol distilled by column stills into vodka or gin. Consisting of a 3,000 litre tank fitted with a column, the unique feature of the Carter-Head still is the copper chamber at the top of the column. This chamber is filled with spices, aromatic plants and juniper berries, which flavour the alcohol vapour when it arrives at the top of the column, having risen up through the plates. This type of still has become extremely rare, but is still used by some distillers, who blend the resulting subtle distillates with the heavier distillates obtained from pot stills.

Flavoured eau de vie made from grain or molasses. The flavouring process can be natural, by infusion or maceration of the alcohol with spices, aromatic plants and herbs, or artificial, by the addition of natural or artificial gin essences. The juniper berry, from which gin takes its name, is an essential ingredient. The minimum alcohol content of gin in Europe is 37.5%. Its flavour and appearance may be adjusted by the addition of sugar and colouring..

The vast majority of gin is made from neutral alcohol produced from grain or molasses. In the case of grain alcohol, the mash usually consists of a mixture of grains such as corn (75%), barley (15%) and other grains (10%) including rye.

‘Distilled gin’: this method enables the production of the highest quality gins. Distillation takes place in batches, using a traditional pot still. This still is heated with steam via a resistance placed in the base of the boiler. Neutral alcohol is placed in the boiler, reduced to between 45-60%. When the alcohol comes to the boil, the steam becomes impregnated with the flavours of the berries and the aromatic plants. The distillation heads and tails are less pure, and are recycled and then redistilled whereas the middle cut is transferred to the bottling centre to be diluted and bottled. Flavouring by infusion: this consists of placing all the aromatic plants, juniper berries and spices either in a cotton pouch suspended in the still above the alcohol, or in a ‘perforated chamber’ at the top of the still. On contact, infusion occurs and the alcohol vapour becomes impregnated with the flavourings released by the aromatic plants. Flavouring by maceration: this process consists of macerating the juniper berries, aromatic plants and spices directly in neutral alcohol at 45%, either by allowing them to soak freely in the alcohol or by placing them in cotton bags for 24 to 48 hours. Some distilleries filter the mixture before distillation, to separate the aromatic plants from the alcohol. Others distill the whole mixture, thereby producing a particularly flavourful spirit. ‘Compound gin’: this technique is based on the mixing of a neutral alcohol (usually from molasses) with either a concentrated gin flavouring (cold compounding) or artificial juniper berry, spice and aromatic plant essences (compound essence). This method does not involve any redistillation. It is mostly used in mass-produced gin.

Once distilled, the alcohol is left to rest for a few hours in the vat, then its alcohol content is gradually reduced by dilution to the desired percentage. Cold filtration may be carried out by chilling the spirit to -2°C, it is then passed through a cellulose filter in order to remove any particles in suspension. Other filtration techniques may also be used, such as activated carbon, by allowing the spirit to flow through a layer of carbon.

THE MAIN STYLES OF GIN

In addition to the flavouring method, by maceration, distillation, or by mixing, gin is divided into various categories:

(London Dry Gin) : this category, also known as‘English style’, represents the quintessence of gin. The term ‘London’ does not signify origin, but rather a style, which can be reproduced anywhere in the world. ‘London Gins’ or ‘London Dry Gins’ are distilled gins, to which no artificial ingredient (flavouring or colouring) may be added; only sugar may be added, in strict proportions (with a maximum of 0.1 g per litre in the final product)

this is currently the only gin to enjoy registered designation of origin status. This gin is produced by a single distillery in Plymouth, in the south of England, the Blackfriars Distillery (Coates & Co) who hold the exclusive right to use the designation.

an ancestor of London Dry Gin, this gin was very popular in the 18th century. Milder and slightly sweet, it was more highly flavoured in order to mask a harsher, less pure spirit base than those currently used. It is a style that is gradually dying out.

gin that has been aged for several months in oak barrels, resulting in its characteristic colour, with glints of yellow.

ANCESTORS AND DERIVATIVES OF GIN

DUTCH GIN: a close cousin of gin, Dutch gin is mainly produced in Belgium, the Netherlands and Germany (Dornkaat). It is made from the alcohol resulting from the distillation of a grain mash (a mixture of rye, wheat, corn and barley), as with some whiskies. Dutch gin is generally distilled in a pot still, and considered to be a more robust spirit than gin. There are two types of Dutch gin: ‘jonge’ (young) and ‘oude’ (old), that is aged in oak barrels for one to three years.
br> LOE GIN: a liqueur made from gin infused with sloes. Some recipes involve a period of ageing in oak barrels.


The introduction of Bombay Sapphire in 1988 enabled all the categories of gin to be updated to modern tastes. Distilleries introduced new aromatic plants and spices. In this way they created gins with unusual flavours. Totally dedicated to the world of mixology, these gins broadened the range of available flavours, so that bartenders could exercise their talents and develop new cocktails. The return to grace of gin thus enabled the reinterpretation of a wide range of cocktails, and lured in a new generation of consumers. Some brands also produced versions aged in barrels, with a view to offering a gin that would be consumed neat.