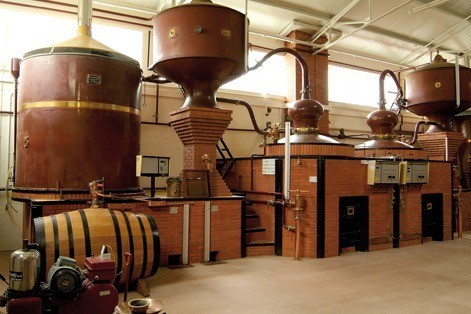 Cognac, celebrated throughout the world for centuries, is an eau de vie made from distilled white wine and produced in the region of the same name. Distilled in pot stills, nowadays cognacs are usually blends that seek to convey the finesse and elegance of their base wines.

Within a century, cognac has become more sophisticated and is now a symbol of French luxury and refinement. Paradoxically, this French success story was orchestrated by wine merchants from all over Europe. Entrepreneurial talent is responsible for this international success. Although cognac’s reputation was built thanks to its traders, this does not lessen the importance that cognac houses place on their land and their vines. Some, often the smallest producers, highlight this unique heritage and continue the tradition by communicating the ideals of their profession as growers to the entire world.

A MARKET WITH MANY STAKEHOLDERS

The cognac market is basically structured as follows :

Owner-producer cognac: from vine cultivation to bottling, these houses cover al aspects and professions of the cognac industry. It is not unusual for those involved to have more than one job. Their destiny is inextricably sealed to the terroir of their estate.

Négociant propiétaire (merchant-owner) cognac : from vine cultivation to bottling, these houses cover all aspects of the cognac industry. The owner reserves the right, according to market demand, to vary its stocks depending on the age counts, and to buy eaux de vie in bulk for ageing or directly for bottling. Generally, blending takes place before bottling.

The 100% integrated trading house: the most demanding cognac trading houses are those that go back the furthest in the cognac production chain. And this starts with the wine-maker. Certain houses have well established links, bound by contract with the wine-makers who grow their grapes and produce their wine according to strict specifications. Once the wine is produced, the houses then take over for the following stages. This way of operating allows them to be closer to the finished product, like the owners’ cognac.

The semi-integrated trading house: this is based on the trading house being able to outsource distillation of the eaux de vie, while conserving the ageing phase: négociant –éleveurs (merchant-producers). These trading houses begin their cognac production by buying in the eaux de vie which they then put into casks in their cellars. Their expertise is implemented from the casking and the ageing process, a determinant phase for final product quality.

Wine merchants: the wine merchants relies on the producers from whom they buy the finished product (distilled and aged). The merchant’s first job is therefore to select the casks which is generally bottled directly. Generally, blending takes place before bottling.

Cognac is an eau de vie made from white wine which is double distilled in a Charentais post still, then aged in French oak casks for a minimum of two years.

The wine-growing region is mainly located in Charente and Charente-Maritime, but extends as far as Deux-Sèvres and to the Dordogne. Cognac AOC therefore covers just under 79,000 hectares of vines. It is divided into six crus defined by the nature of the subsoil: Grande Champagne, Petite Champagne, Borderies, Fins Bois, Bons Bois and Bois Ordinaires. A well known 19th century geologist, Henri Conquand, described the nature of this region’s soils and their impact on the cognac produced. Grande Champagne and Petite Champagne: The heart of the Cognac region, with clay-limestone soil. The eaux de vie produced here are fine (especially for Grande Champagne) with predominantly floral notes. Les Borderies: North-west of Grande Champagne, this is the smallest of the six crus, with siliceous-clay soil. The eaux de vie are well-rounded with a violet aroma. Les Fins Bois: The Fin Bois appellation represents the largest cru, most of which is covered by clay-limestone top soil, but also heavy clay soil. The resulting eaux de vie are above all fruity (pressed grapes) with a light floral bouquet. Les Bons Bois: Located on the coast, Bons Bois has sandy soil. This area produces well-rounded eaux de vie that age quite quickly, with hints of fruit. Les Bois Ordinaires: On the ocean, this cru, with mostly sandy soil, accounts for about 2% of cognac production. These are quick ageing eaux de vie with a characteristic terroir flavour. Source: BNIC

Step 1 - The vines and the wine

Ugni Blanc, the symbolic cognac grape variety, accounts for more than 95% of the cognac vines. The two other varieties are used in very small quantities and include la Folle Blanche. This grape variety is very fragile and hard to grow intensively. It has gradually been replaced by Ugni Blanc. Once harvested, the grapes are pressed and then immediately prepared for fermentation. This fermentation lasts about three weeks to obtain an acidic and cloudy wine, with a low alcohol content of 9%, called vin de chaudière. Chaptalisation (addition of sugar) is prohibited. The harvest and wine-making usually starts during October for completion in November. It should be noted that no sulphur or other substances, such as sulphites, have been added to the wines, since these would affect the taste of the eaux de vie and seriously damage the finished product.

The vin de chaudière is distilled in a traditional pot still, called a Charentais alembic. Two distillations are carried out to convert this wine into eau de vie. Brouillis (the first distillate), is obtained from the first distillation, lightly cloudy and milky with an alcohol level of 28 to 32% ABV. In order to give character to the eaux de vie, producers can keep the lees and distil the wine with them, which will produce richer and more aromatic eaux de vie. The wine can equally be distilled without the lees for a purer eau de vie. The brouillis is poured once more into the boiler for a second heating. At the end of the second distillation, called bonne chauffe, the middle cut will be separated and stored for a minimum of two years in an oak cask. The heads and tails, unfit for consumption, are discarded. The seconds are reincorporated into a brouillis to be distilled once more. The middle cut with alcohol levels at 68 to 70% is then put into casks. The appellation requires distillation to be completed by 31st March of the year following the harvest at the latest, so that the age count can start from 1st April. The success of the distillation cycle, which lasts about 24 hours, requires the utmost attention, constant surveillance and great skill on the part of the distillers who can by using various distillation techniques (proportion of fine lees, recycling the ‘seconds’ in the wines or the brouillis, adjusting the temperature, etc.), stamp the cognac with their own personal signature (Source: BNIC)

Two varieties of oak tree, the Pendunculate and Sessile Oak, have the required characteristics for cognac. These are grown in the Allier (Tronçais) and Limousin regions. To be selected, an oak tree must be at least a century old. Once cut, the tree is left to dry in the open air for one to three years. Other determining factors are: the toasting of the wood and its degree of intensity, which will influence the cognac’s profile.

‘Single estate’ cognacs – a cognac coming from just one domain – are rare. The majority of cognacs, all crus and ages, are blended, then bottled since, historically, négociants bought eaux de vie from different areas, then stored and blended them to produce their cognacs. Today, the majority of eaux de vie produced are blended cognacs. Once the initial blend or la coupe is achieved, the final touches can be made (‘façonnage’). The master blender has four permitted additives at his disposal: distilled or de-mineralised water, boisé, a woody aroma (additive obtained by boiling water and oak shavings together) for the ‘aged’ aspect that it brings to the cognac, sugar syrup (about 2% of the bottle) and caramel for colouring.

VSOP (‘Very Special Old Pale’): blend with minimum 4 years of ageing (age designation 4). This category was created at the beginning of the 19th century following a request from the British Royal Family for a ‘pale’ cognac: one with no additives, sugar or caramel.

Extra – Hors d’Âge: a blend of great quality which is of far older than XO.

Numerous houses in search of a more aromatic complexity do not hesitate to blend their cognacs with another cognac, much older than the minimum age required.

For classifications of their eaux de vie, cognac producers refer to an age count from the 1st April of each year.

Each category of cognac has its own serving method. Therefore, a sommelier and cognac connoisseur would not expect the same qualities from a VS as from an XO, and vice versa. There are three principal ways of drinking cognac. Until the Second World War, it was a popular to drink Fine with water. Fashionable in clubs and hotel bars, cognac served this way was enjoyed as an aperitif in colonial times. This somewhat forgotten custom was then replaced by ‘cognac on the rocks’. Neat cognac, long associated in its role as a digestif, became more popular. When tasting neat cognac, it is the quality of the eau de vie that counts, rather than when it is drunk. Cognac can also be served as a long drink, with sparkling water or soda water. This method has become fashionable in the last 10 years or so, notably in the United States and Asia.