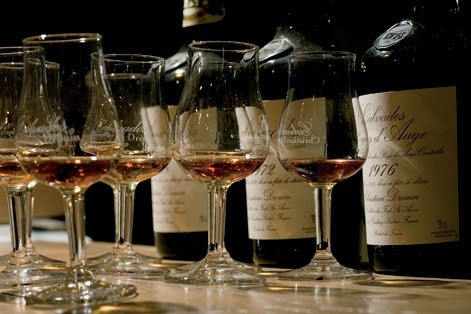 Calvados, a quintessential Norman brandy, is exported all over the world. In France, calvados is well on the way to winning over a new generation of interested and demanding consumers, thanks to the audacity of some producers and merchant-producers in the region.

WHEN TRADITION GOES HAND IN HAND WITH INNOVATION

Calvados, a quintessential Norman brandy, is exported all over the world. Thanks to a new generation of adventurous producers and négociants-éleveurs, calvados has broken free from its insular image and obsolete modes of consumption. These producers came off the beaten track to find a means of enhancing all the richness and aromatic diversity of this spirit. They have achieved this through a variety of oak casks and the expression of different terroirs. Port, Madeira and sherry casks all lend themselves to the creation of new taste experiences. Amongst these, Blanche de Normandie is an un-aged version of this apple brandy: calvados in its simplest form.

THE GARDEN OF EDEN

There are four main types of cider apple varieties: bittersharps, bittersweets, sharps and sweets. The bittersharps are high in tannins and bring structure to the finished product while the bittersweets provide fruitiness and richness. The sweet apples are used primarily for the cider’s alcohol content and The sharps provide the necessary amount of acidity. Within the strict AOC (Appellations d’Origine Contrôlées) framework, a large variety of apples is planted in the orchards to compensate for the years of low yields. Calvados is never made from just one variety of apple. During the 1990s, the INAO (Institut National des Appellations d’Origine - the National Institute for Product Designation of Origin) recorded over 200 varieties. Even if only twenty or so of these are regularly cultivated, variety guarantees quality. Pears must also be produced locally. The ‘Plant de Blanc’ variety is used more and more to produce these pears, which are too bitter to be eaten.

The orchards Besides the variety of apples and pears, the type of orchard and soil in which the trees grow have a real impact on the finished product.

Tall standard trees: meadow orchards with tall standard trees dominate the Norman countryside. These orchards are characterised by meadows with Normandy cows grazing amongst tall standard apple and pear trees. These trees bear their first fruit after 10 years and reach full maturity from 30 years onwards. They can even reach the venerable age of 70 years old. The highest density of an orchard of this type is 250 plants per hectare for cider apple trees and 150 plants per hectare for pears. Mechanical shaking of pear trees is forbidden during harvest.

Half standard trees: these orchards are a more modern phenomenon and exclusively dedicated to intensive fruit production. The trees produce their first apples after five years and can live for 30 or so years. The orchard is mechanically maintained and plant density is much higher (1000 apple trees per hectare), yielding an average of 35 metric tons per hectare. Though this form of cultivation was very fashionable in the 1980s, it is now becoming obsolete in favour of meadow orchards which produce far better fruit.

A French eau de vie produced in Normandy which is distilled from cider or perry and which has been aged for a minimum of two or three years. Calvados has a minimum alcohol content of 40% ABV. There are three calvados appellations: Pays d’Auge, Calvados and Domfrontais.

Step 1 - From apple to cider

Harvesting begins at the end of September and ends in December. Once harvested, the apples are stored in barns, in box pallets (crates that hold about 300kg) or even on the ground, for ripening. The apples and pears, when ripe, are crushed and then pressed. In order to extract maximum sugar and tannins, a last stage called ‘rémiage’ can be carried out which involves soaking the skins and pulp in water and pressing them again. Nowadays this technique is only used by the largest cider producers. Fermentation of the apple juice is a natural and spontaneous process and the use of additives is prohibited. Fermentation takes place in vats for a period of 28 to 42 days, depending on the AOC certification. At the end of this period, the ciders that are to be distilled will have an alcohol content of between 5 and 7%. Some producers distil their entire cider production in winter and spring; this is called ‘fresh’ cider. Others keep a part aside until autumn and distil a ‘mature’ cider. The former is fresh and smooth while the latter is more developed and racy.

The distillation period is from the 1st July until 30th June the following year. The AOC allows for two distillation methods.

The ‘traditional’ double distillation pot still The double distillation pot still, which is obligatory for the distillation of Calvados Pays D’Auge, has three elements: a copper pot still where the cider is brought to the boil; an intermediary vat called the chauffe cidre (cider heater); a condenser: a copper coil immersed in iced water, which cools down and liquefies the vapours. The tails are discarded after the first distillation, leaving the brouillis or the petites eaux (low wines), with an alcohol content of 28 - 30% ABV. During the second distillation, the heads and tails are discarded in order to collect only the heart, or bonne chauffe, at 70% ABV.

The ‘modern’ column still The column still is to Domfrontais what the pot still is to Pays d’Auge: an essential item. It also has three elements: the boiler or cider heater; a ‘stripping’ column, made up of about 15 trays through which the cider and vapours circulate in opposite directions, to allow the aromas to enrich the vapour; a condensation column. Three taps allow the separation of the distillate heads and tails, and the separate the heart.

As required by the appellation, calvados ages for two to three years in oak casks of varying sizes. Ageing can be carried out in new casks, as well as in previously used casks which may or may not have been refreshed with cider. The casks may also have been used for other types of alcohol (wines, rum, sherry, etc.). The use of new wood is rare but it may sometimes be used initially to provide the required amount of tannins and aromas, before being transferred to a used cask (200 to 600 litres) for several years. 1000 to 10,000 litre large casks can still be used. These are used for ageing the young eaux de vies as well as storage them.

There are three calvados appellations. For each of these appellations, the apple orchards are made up of at least 20% local varieties, about 70% of bitter or bittersweet and a maximum of 15% of sharp varieties.

Calvados Largely produced in the Lower Normandy region and in certain clearly defined areas of Eure, Mayenne and Sarthe, the Calvados appellation assures that its products have been made from apples and pears, the proportions of which are at the discretion of the producer. Natural fermentation lasts at least 28 days. The cider is usually distilled in column stills and aged in casks for a minimum of two years.

Calvados Pays d'Auge Located where the departments of Calvados, Eure and Orne meet, Pays d’Auge is made up of hilly terrain of shallow clay-limestone soil. The Calvados Pays d’Auge appellation indicates that its calvados has been made with 70 - 100% apples (the remainder being pears). Natural fermentation lasts at least 42 days and is followed by a traditional distillation process with a double distillation pot still. Like all calvados, the minimum ageing period is two years.

Calvados Domfrontais Like Pays d’Auge, the Domfrontais region is concentrated in three departments – Orne, Manche and Mayenne – and has schist and granite soil. The Domfrontais appellation stipulates that the calvados should be made from a mixture of apples and pears (at least 30% from perry pears). Natural fermentation lasts at least 42 days, followed by a simple distillation process with a column still. Lastly the eau de vie must be aged for at least three years in oak casks.

THE MAIN STYLES OF CALVADOS

Besides the appellations of Calvados, Pays d’Auge and Domfrontais, calvados is divided into two categories: blends or vintages.

Blends : Calvados blends have the following classifications: Fine, Extra, XO. Some labels indicate the age of the youngest eau de vie contained of the blend. For their eaux de vie classifications, calvados producers refer to the age count, using 1st July of each year as a reference. The age of calvados is determined by its date of distillation.

Vintages: This can also refer to single cask calvados. The bottling of these vintages undergoes a rigorous selection process and gives rise to outstanding eaux de vies with strong identities.

A quintessential Norman eau de vie, calvados is exported all over the world In France, calvados is well on the way to winning over a new generation of interested and demanding consumers, thanks to the audacity of some producers and négociants-éleveurs (merchant-producers) in the region. Over the years calvados has suffered stereotypes in its serving methods – ’trous normands’ (a small glass of calvados drunk between courses), ‘cafés calva’ (a hot coffee with a side of calvados) – inherited from previous generations. Calvados is a surprising and versatile eau de vie and, unlike many other alcoholic drinks, can be enjoyed in a multitude of different ways, every one as delicious as the next. Whether it is tasted in its purest form, on ice, in a cocktail or drunk with food or as an ingredient in a recipe, calvados provides an unparalleled range of flavours.