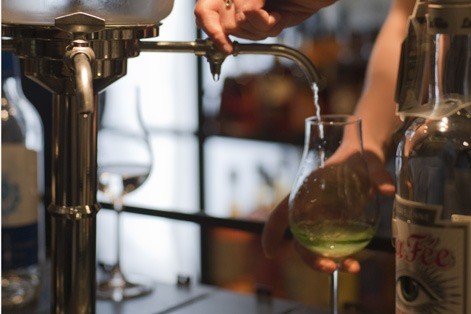 Venerated in artistic circles and widely held as a muse (known as the “green fairy”), absinthe equally became something of a daily popular tradition: it became common practice to gather in bars and bistros for ‘l’heure verte’, meaning ‘green hour’.

ABSINTHE, A VICTIM OF ITS OWN SUCCESS

Absinthe's glory days were back in the 19th Century. Highly praised and lauded as the ‘green muse’ in artistic circles, its consumption soon spread to the masses, giving rise to the daily practice of gathering in bars and bistros for so-called ‘green hour’. Like many other European cities, Paris was an arena for all types of excess, but it was also the birthplace of a new, marginal lifestyle, sustained by an artistic community and from which the cultural ‘bohemian’ phenomenon began. Vilified by its detractors and prohibition movements, absinthe was banned in many countries, including France in 1915. In reality, it was a lobby of several winemakers suffering from a terrible phylloxera crisis who eradicated the ‘green fairy’ with a media campaign surrounding its toxicity. It was not until 1988, under the aegis of the European Union, that absinthe once more became legal, subject to the control of thujone levels, the ingredient that spurred its controversy.

THUJONE, THE MOLECULE THAT MAKES YOU MAD?

Thujone is one of absinthe's active ingredients. Though appreciated for its digestive properties and menthol aroma, it can cause convulsions and provoke a loss of inhibition and, in strong doses, hallucinations. However, the risk of convulsions is low: it would require a concentration one thousand times that present in absinthe. As for the hallucinogenic properties of absinthe, these appear to be due to the combination of different compounds from the various herbs used in the spirit’s preparation: fenchone from fennel, anethole from aniseed and pinocamphone from hyssop. According to research collected to date, the amount of thujone present in traditionally-made absinthe is less than 10 mg/litre. Thuyone does not readily vaporise during distillation and most of it stays behind in the still pot. Only absinthe made from a mixture of grand wormwood essential oils and alcohol could contain a dangerously high concentration of thujone.

THE RETURN TO FAVOUR OF THE ‘GREEN FAIRY’

In 1988, the European Union took the first step towards relaxing the law that banned absinthe. By defining maximum levels of thujone permitted in the composition of absinthe, the EU legalised its consumption in Europe. The same year, in order to comply with European regulations, a decree was passed in France: alcohol bearing the name of absinthe and with levels of thujone superior to those fixed by the EU, were forbidden. To bypass this ban, and in order to reintroduce absinthe into France, the drink was sold under the description ‘a spirit made from extracts of the absinthe plant’. The true resurgence of absinthe during this period took place in countries where it had never actually been banned: particularly in England but also in the Czech Republic which, since the fall of the Iron Curtain, had become a tourist destination popular with artists and the general public. When visiting Prague, tourists also discovered absinthe, but one that was made in the Czech Republic. At the instigation of British importers, the Czech distillery, Hill’s, introduced its ‘Bohemian Style Absinthe’ to Great Britain, a modern absinthe which set the trend.

Absinthe is a strong alcoholic liqueur obtained from a blend of alcohol and distilled herbs or herb extracts, mainly from wormwood and anise, but primarily also from three other aromatic herbs: Roman wormwood or small absinthe, sweet fennel and hyssop.

There are different ways of producing absinthe : Modern or industrial absinthes are generally made from a blend of alcohol, natural or synthetic flavourings and colouring. These absinthes already existed before 1915. Traditional absinthes require a maceration stage followed by distillation.

The plants: Absinthe is made from plants, three of which, when combined, form the ‘holy trinity’ of anise, fennel and wormwood. Other herbs may be added to this triple base: hyssop, melissa, star anise, small absinthe, angelica root and spices such as coriander, veronica, juniper and nutmeg. The quality of the finished product will depend on the quality of the herbs, which varies according to soil type, climate and growing and harvesting techniques. The alcohol: The base alcohol may be either a beetroot or grape brandy. In France, premium absinthes are made from a wine-based brandy.

By distillation: Traditional absinthe is made via maceration followed by distillation, with herbs and spices among the ingredients. The maceration stage is carried out in a vat where the alcohol (85%) and a blend of plants are steeped for several days. At the end of this step, the liquid is filtered and reduced with water before being placed in an alembic still to be distilled. Distillation involves removing the heads and tails, and retaining only the heart. By mixing: As with some gins, this production method results in absinthes of lower quality compared to those made using the traditional distillation process. It consists of blending the alcohol with absinthe flavourings.

At the end of the distillation process, the new distillate will contain about 75% ABV. Once reduced with water (Blanche or Bleue absinthe), it can be bottled or left to age in casks.

Colouring: Colouring, both natural and artificial, is frequently used in absinthe production. In terms of natural colouring, a final maceration stage is carried out after distillation. Traditional absinthes are coloured by the chlorophyll contained in the various herbs used, such as hyssop, melissa or small absinthe. During this maceration phase, the alcohol takes on a subtle green hue and gains in aromatic complexity. This is known as green absinthe (Verte). Alternatively, a red colour can be obtained from hibiscus flowers.

Bottling: Artificially coloured absinthes are very stable. They do not require any special treatment. However, naturally coloured absinthe needs careful monitoring, as the chlorophyll it contains is extremely fragile. When exposed to light, these absinthes gradually change colour, shifting from green to yellow and ultimately amber. This explains why old bottles of absinthe can vary in colour. Despite serving as proof of age, this change in colour is unpopular in modern absinthes. Because of this, natural absinthes are now sold in opaque bottles.

The main categories of absinthe

The absinthe revival resulted in a complete revision of the traditional categories, which became obsolete. Five types of absinthe were commonly recognized in the past: Ordinaire, Demi-fine, Fine, Supérieur and Suisse (the latter, ‘Swiss’ is not an indication of source country). These categories related to variations in alcohol content and absinthe quality. The Supérieure and Suisse absinthes, made via distillation, offered better quality and a natural colour. The Ordinaire and Demi-fine could be produced using artificial colouring, with a blend of neutral alcohol and natural essences. Today, a distinction is made between ‘mixed’ (modern) absinthes and ‘distilled’ (traditional) absinthes. Mixed absinthe

Absinthes resulting from a blend of absinthe essence and neutral alcohol. Distilled absinthe

• BLANCHE/BLEUE (‘WHITE/BLUE’): colourless absinthe that has been distilled and bottled with a high alcohol content. The term ‘Bleue’ refers to Suisse absinthe.

• VERTE (‘GREEN’): white absinthe that has undergone a final maceration process with a blend of herbs, thus acquiring colour naturally, and a more complex taste. ‘Green’ absinthe can also be the result of artificial colouring, in which case its taste will not be affected.

There is a well-oiled ritual for drinking absinthe which adds to the fascination for the ‘green fairy’: pure absinthe is poured over a slotted spoon, called an ‘absinthe spoon’, with a sugar cube on top. Iced water is then very carefully poured over the sugar cube until it has completely dissolved. The sugar reduces the natural bitterness in traditional absinthe which is due to the presence of absinthin in the green nectar. One dose of 68% absinthe requires three to four parts water. Absinthe can also be enjoyed in a myriad other ways: with or without sugar, with gum or almond syrup, white wine (replacing water) or anise…